The Province Teambowl Tournament was open to all bowlers of all levels. Five player teams competed in a pins-over-average format and the number of winners was determined by the number of entries. Most centres had enough entries to set up their own zones and those that didn’t, combined with other centres to form a composite zone with the approval of the Bowler’s Association.

The tournament started in 1962 with 8,000 bowlers throughout the Province competing for a chance to win a trip to Hawaii or Reno, which changed from year to year. In 1965, pictured below, the 5 members of the Wing-Dingers, received a free trip for 2 to Hawaii for 2 weeks. Other years, each winner received a week-long, all expense paid trip to Reno as well as a Bowler’s Association cardigan sweater. In 1975 there was 190, all expense paid trips to Reno given away to the winners.

In 1973 the entries had grown to 38,000 bowlers and a year later over 46,000 entered. The Province Teambowl Tournament quickly grew to be the largest participation tournament in all of Canada. 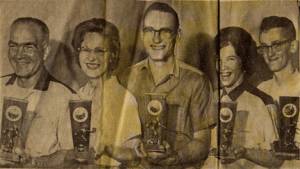 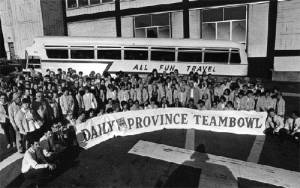